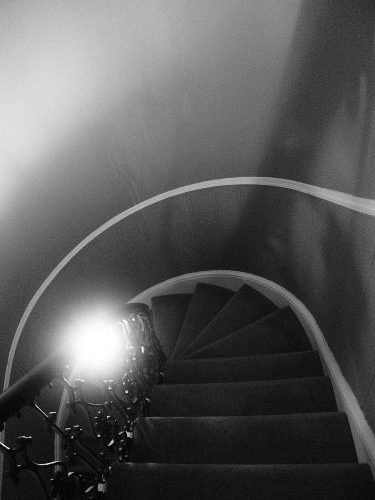 The house I grew up in was haunted. The house was built in the 1800s and has been occupied by families and even as a factory warehouse at one point.

We moved there in 2000 and apart from being a big old house, seemed pretty normal. It was only after a year or so that a few strange things happened. As a town house, there is a staircase that runs up from the ground floor to the second floor and this is where most of the activity happened. The stairs began smelling strongly of pipe smoke which would go away again as quickly as the smell began. No lingering smell as smoke would usually hang around, it would be there one minute, gone the next. Very strange.

This happened every now and again for about a year before we finally saw the man on the stairs. When some work was being completed on the house, the internal doors of some rooms were removed to be sent off to have the paint stripped from them. This left my parents room with no door for a week and a direct line of sight from their bed to the hall way looking up the stairs. It was during that week that they went on holiday and left us with a relative who stayed in their room while looking after us for a few days. My auntie who was looking after us looked up from bed and could see a man, dressed in old fashioned clothing walking up the stairs. She froze and didn’t go out to look for a couple of minutes. Within that time the smell of pipe smoke was back again and we then realised that the man on the stairs was in fact where the smell had been coming from all that time.

He was seen again by my mum a year or so later but the pipe smoke smell sporadically came and went on the same place on the stairs for a good few years. The activity comes and goes but it’s usually in autumn time and then stops for another year. We haven’t seen or smelt him for a good few years now.

The front door of the house also acts strangely and sometimes won’t let you in or out at times which is a bit spooky. Because there is no real reason for it and it only happens occasionally we do wonder if this is something to do with the ghost, although it could just be the lock on the door acting up every now and again!
Hannah Barton
Submitted by Hannah