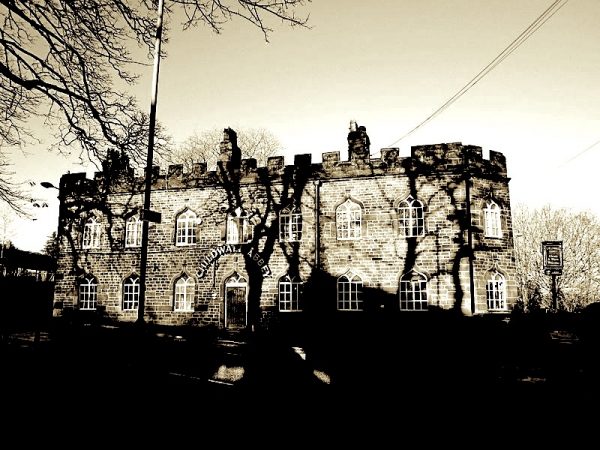 During the power workers strikes of the early 70’s in Childwall, where I lived, I used to like to go for a pint on Tuesday night.  The two pubs I liked to go in where in different areas from the power cuts and I decided to go to the nearest, the Falstaff.   This pub – now demolished to make way for houses – was on a hill which was in darkness.  Not knowing how long the power would be off,  I crossed over to check out when the lights might be on, but the doors were locked so no chance of a drink here!  My next choice  was The Childwall Abbey a  Burtonwood Brewery  owned pub.   So, it being a short walk along Childwall lane off I walked hoping to find the Abbey open.   As I neared the end of Childwall lane with Well Lane on my right I saw a tall man in a overcoat and trilby type  hat coming  in my direction. I quickly spotted  the pub lantern style Burtonwood sign lit up and looked back toward the walking man and said “Well this pub’s  open”, but he was gone.   I stopped in my tracks puzzled; he could not have passed me or turned back down Well lane as the road is a long straight hill, the Church high stone wall was on the other side of the road.  He simply disappeared!   I was not frightened as he looked just an ordinary man. I went for my drink met friends did not discuss the experience and gave it no  further thought.

Many years later,  I read a well known Liverpool paranormal writers account of two local police (on the beat bobbies) going to answer a ladies complaint of a strange man following her on the same Well lane! the area was well searched, until one police man spotted a tall figure of a man.  When the officer approached him for questioning he simply vanished.