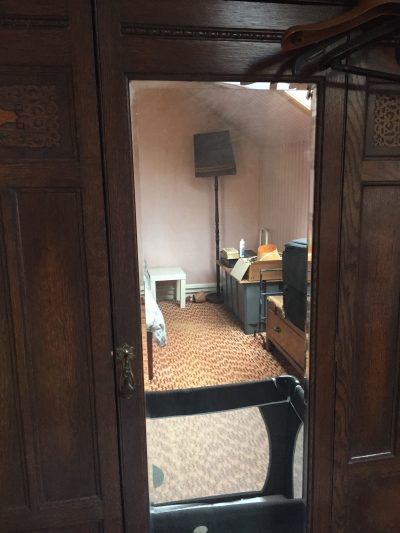 We became the owners of this house in Wallasey in late 1983 and took up residence in early 1984, after some building work was done. In the intervening months I often walked over from our old house to check on its state, and several times I sat in the dark in the room that was to become mine. Now it has a window built out onto the top of a two-storey bay, from which my desk overlooks the river, but then it only had quite a small window. Nonetheless I didn’t experience any unease. I was making the place familiar, and I enjoyed the feel of the deserted house. I do belatedly wonder if I had any subconscious notion that its darkness needed for some reason to be confronted.

Jenny and her sister Penny were the first to have a sense of a presence. On one of Penny’s visits our then young children crept up behind her in the guest-room, but in fact they were downstairs, and nobody was there. I was happy to hear it but politely interested rather than convinced. I was rather happier about the next incident – indeed, we all were, though certainly not immediately. Soon after moving in we returned home from a family picnic to find that we’d been burgled. It appeared the criminals had made their way up the house, taking all Jenny’s jewellery with them in a bag. Something had frightened them in the guest-room, however, because they’d fled so hastily that they had left the jewellery there. We had an alarm system installed, but perhaps the presence on the third floor is enough. Whenever we go away for any length of time Jenny makes a point of asking it or them to look after the house.

I should describe the room. It’s about sixteen feet by fourteen and a half, with a view across the Mersey towards the Liverpool waterfront through a side window in the longer wall, while the rear window beneath a skylight overlooks our large back garden. Against that wall is the water tank for the house, although it wasn’t in there when the first incidents took place, and an old dressing-table with a mirror. There’s a wardrobe, its door inset with a mirror, against the side wall, and two bookcases beside a radiator on the wall that the room shares with mine. The room also contains a double bed and a few stray household items. One odd, though surely not supernatural, phenomenon is that in the dressing-table mirror the wardrobe appears to merge with the wall. In fact it is simply difficult if not impossible to distinguish the edge of the wardrobe from its shadow, a condition that persists even on the sunniest day. If I were writing a story I might describe it as resembling a barely open entrance composed of shadow.

The word is now out that the room may be haunted. Reactions differ. Some visitors have yet to encounter anything. Poppy Z. Brite was daunted by the prospect, but in the event she merely thought she dreamed that something touched her face as she lay in the bed. Our son’s friend Robin felt someone sit down by him on it, twice. Jenny can’t sleep in there, because it makes her feel as if she’s sharing the room with a demanding child. Our son Mat has had the impression that something was hanging across the room, while our daughter Tammy seemed to sense something outside the door. Keith and Martie from Holland stayed overnight, and at breakfast Martie asked Keith if he’d meant to put a Stephen King book in their suitcase. It was an edition of Needful Things, I believe, but not one we had. He denied all knowledge, and when they went to look the case was empty. Of course I may be to blame for some of these incidents, because by now I’ve had more experiences in there than anybody else has mentioned, and I’ve let folk know.

I’ll save the worst for last. First came the coins, about four years ago. I noticed two new (in the sense of current) pennies on adjacent shelves of the first bookcase, but when I looked the next day there was another on the next shelf down. Since then they’ve turned up all over the room, at the last count a dozen altogether, which I’ve arranged in a pattern on top of a disused television to see if they shift. Perhaps they could all have been shed by living guests, but not long after the first few coins appeared I was treated to a closer display of their antics. I’d just opened the curtain at the side window on a sunny afternoon, and turned to hear and see a penny land on the floor between the door, the wall and the bed. The space measures nine feet by just under five, and the coin lay flat pretty well at the intersection of the diagonals. I was impressed.

That’s a good word for my reaction to my first encounter after dark. I snore, perhaps not as much as I used to, given nightly applications of Snorodont or whatever the spray is called. For a while, until she told me not to, I tried to give Jenny nights off by sleeping in the by now famous room. One night I was drowsing, though by no means asleep, when something sat beside me on the bed, on the side towards the skylight. If we had pets I would have thought it was a kitten. I found the sensation interesting but unthreatening, and turned over, at which point it came and sat in front of me again. I was duly convinced of its presence but not alarmed, and went to sleep.

We’re almost at the unresolved finish. I’ve taken to following Jenny’s example and asking anything that’s there to keep the house safe whenever we go away. In the summer of 2004, on a sultry night before we left for Lesvos in the early morning, I looked half-naked into the room and made the request. As I turned away, something the size of an adult hand but no heavier than cobweb was laid on my bare shoulder. I found it reassuring on the whole.

Jenny and I had discussed befriending the room by spending the night up there together. During one of my attempts to let her sleep without my snoring I wakened at about two in the morning to discover that she’d decided to try the experiment. It was only when I opened my eyes and reached for her that I realised the silhouette next to me, its head on the other pillow, wasn’t Jenny. I tried for a very long time to move and cry out. Apparently I achieved the latter. In our bedroom on the floor below Jenny heard me make some kind of protest, but I’ve often exhorted her not to wake me if I’m having a nightmare, because I believe these dreams contain their own release mechanism, and I resent being taken out of them before the end. Jenny headed for the toilet on the middle floor, and when she returned I was still making the noise. Perhaps I was dreaming, in which case it had to be the longest nightmare, measured in objective time, that I’ve ever experienced. It consisted purely of lying in the bed I was actually in and trying to retreat from my companion. I admit to never having been so intensely terrified in my life. After minutes I found myself alone in the bed. I made myself turn over and close my eyes, but had a strong impression that a face was hovering very close to mine and waiting for me to look. Meanwhile, downstairs, Jenny felt an intruder sit beside her on our bed. I couldn’t expect anyone to accept what happened if this were a work of fiction, but eventually, feeling that the presence had departed, I went to sleep.